Very different night last night – actually staying in a hotel rather than a tent.  Being able to stand up while getting changed was a novelty, as was air-conditioning, it was very warm in Bordeaux.  Second novelty, was getting a lie-in, the train didn’t leave Bordeaux until 11:25 and the hotel had an unlimited breakfast until 10:30.

After taking advantage of the breakfast it was over to the station to do a recce and work out how to get the bikes onto the platform and generally sus out the layout of the station.  All successfully sorted out (we would take the bikes into the car park) then back to the hotel for a bit more of the unlimited breakfast. 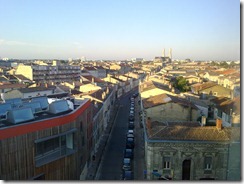 Sunrise over Bordeaux (from the hotel window)

Then it was time to head for the train.  Getting on the platform was fairly easy apart from a section which said “no pedestrians” – so we just cycled that bit instead.  Getting on the train was slightly confusing until Pierre worked out the seats folded up  and there were belts to hold the bikes in place. 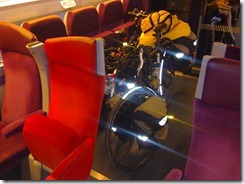 Bikes on the TGV

As we started moving out of Bordeaux I did a trip to the Buffet car and got a half bottle of Baron Rothschild’s Mouton Cadet Bordeaux red and two plastic cups.  As the train moved out of the city and through the vineyards of Bordeaux, we enjoyed a glass of fine wine to see us on our way.

The train was fast to Paris Montparnasse and according to Pierre’s GPS it was travelling at around 300Km per hour.  It certainly looked and felt fast as the cars on the AutoRoute looked like they were going backwards and the stations we passed through were impossible to read.  We arrived 15 mins early in Paris and only had to change platforms for the train to Angers.  The train was the same format as the previous one so the bikes were quickly in place, the train left on time and we arrived in Angers on time.  The French rail system just seems to work.

Then we had a 30km cycle ride back to where the car was parked.  The wind was from the west – and we were heading east – so for the first time we had a tailwind to help us on our way.  What a difference, I was able to cycle between 20km/h and 30km/h and sometimes faster.  Even the hills were easy compared to what we had had before.  Pierre as ever zoomed on ahead and had to wait at junctions for me to catch up.

After approx an hour we arrived back at our starting point – grabbed a cold beer from the fridge and started stripping the bikes down to get them in the car.  Once sorted, we set off for Caen and the 23:00 overnight ferry to Portsmouth.

On the ferry, a quick “steak and chips” (very good) and a few beers in the bar then it was crash out for the night.  Arrival in Portsmouth the following morning was early but got us back to London at 09:00.  Sort the cars out and back home.

Overall we had cycled 550Km in some pretty varied weather – to me – a great trip.