At 8.30 am there was a shower of rain so once again they had to pack away soaking tents. The wind was moderate and they hoped that it would stay that way.

They headed off through the Venise Verte – it was flat, green and lush and there were pictures of frogs on most of the hotels and restaurants – Joe didn’t check the menus though!

As they cycled along, the wind speed and strength was picking up. They were heading south-west and the wind was coming from the south west – it was the return of the dreaded headwind. Today they were told that it was running at approx 25 km/h. As they moved into the Charante Maritime area, the trees were thrashing and the bikes were very unstable. The wind was bordering on gale force but they carried on.

They were unable to find anywhere to get lunch – no cafes, or food shops in any of the villages that they passed through. Hairdressers and florists aplenty, but nowhere to buy food or drink. This was a serious problem as they were using lots of energy cycling against the wind and were tired from the previous day.

They had a problem getting over to Fouras as they were directed towards an autoroute, which of course they couldn’t use ( and wouldn’t want to) . It turned out that their cycle route had a route barred sign across it so they had to work their way around.

At about 5-6 km from their destination, Joe was at the limit of his endurance and had to stop every few minutes. He had run out of energy and it took ages to reach the campsite.

They had made reasonable progress up to a point but the last few kms were dreadful.

Unlike the last campsite, this one was huge and a person on a bike had to show them to their pitch. They dumped their bikes and headed for the campsite bar for something to eat and drink – to find it shut! So they had to walk a kilometre or so into town – there was no way that they were going to get back on their bikes! 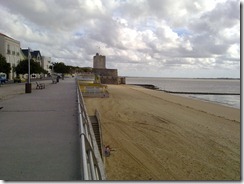 They had a couple of panaches and a crepe each and then returned to rig their tents. The wind was still strong and some of the tent pegs came out and had to be re-pegged.