Sand, rain and wind – it’s a daily challenge! Not much sleep for our intrepid cyclists, yet again as the rain beat down and the wind howled around the tents. The tents were in their usual state when they broke camp – sodden, with the added extra of wet sand! Joe looked at the campsite flags as they were having breakfast and said to Pierre that the wind was from the east. Pierre couldn’t believe it and looked round – yes the wind was from the east and that meant yet another strong headwind! They had obviously seriously upset Mr Murphy.

When they put the tents away they were wet outside but dry-ish inside. Joe’s also contained a number of flies, ants, bugs and spiders! Joe had been bitten in the night – probably by ants looking at the size of the bites. Pierre had also had ants in his tent but claimed not to have been bitten – maybe he’d eaten something they didn’t like?

Leaving Hourtin Plage, it was drizzling but warm so they didn’t bother with their wet weather gear. They went straight up a hill and travelled on a road – both a novelty after the last few days! Riding into a headwind was not however unusual. After Hourtin, it was flat going again, but with oak trees alongside, not pine trees. The route stretched out into the distance and they just had to put their minds into freefall and keep pedalling.

They stopped for a panache just before midday and listened to the church bells peal. That’s a common sound in France – much less so these days in England.

They stopped in St Helene at about 12.45 and set about finding somewhere for lunch. No restaurant or bar serving food but a Salon de The had baguettes and canned drinks to take away. They were due to shut at 13.00 ( for lunch) but had queues of people waiting for sandwiches so finally managed to shut up shop at 13.15!. Joe and Pierre sat with their oranginas and baguettes in the shade – the sun had come out and it was very hot.

They picked up a cycle run which ran for a distance of 30 km direct fro Bordeaux to the coast. Once again they marvelled at the network of good cycle routes in the area. The lizards and grasshoppers seemed to like them too – especially away from towns. It was now very warm as the clouds had disappeared and they were glad of the shade of the trees.

They came off the cycle route slightly early and ended up cycling through the environs of Bordeaux. The centre seemed to be one big traffic jam. Bikes seemed to be the fastest way around Bordeaux – even the police were using them. 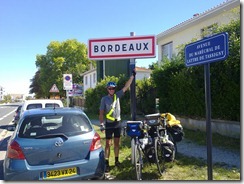 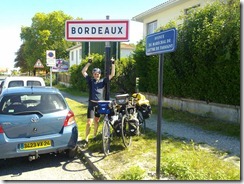 At first they headed for the wrong Etap hotel but they were given directions and arrived at the Etap Hotel Gare St Jean, opposite the station. They stripped their bikes and put them in the storage area downstairs, took stuff to their rooms and set the air con to max cold, fan to maximum and climbed into their showers. They were very hot! 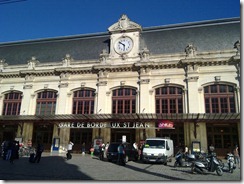 After a beer or two in the station bar they headed into town and found a street bar in a pedestrian area and sat and watched the world go by. They went into a restaurant in a buzzing square – all Bordeaux seemed to be in a party mood. Although people were out drinking they were clearly only out to enjoy themselves and there was no sense of threat or menace, as you might get in some city centres in the UK.

Pierre had steak frites and Joe had scallops with an asparagus risotto. Joe then followed up with cheese and Pierre had cafe gourmand. What surprised Joe was that the litre of house red wine that they had was vin de pays d’Oc , not Bordeaux, and the cheese was brebis from the Pyrenees. We speculated whether the chef or owner was from the Languedoc – or whether local produce was too expensive! It was the most expensive meal of the trip but very good, and they felt that they deserved it. 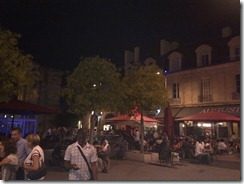 Discussing the trip, they felt that Fouras to Royan had been the best day – the scenery had been the most interesting ( bridge, lighthouses, variety) and the cycling had been really good.

They then headed back to the Gare St Jean to make phone calls and for another beer. The temperature was balmy and it felt like a mediterranean summer evening!