Today (9th April 2011) we had planned the first cycle training run for Big Wheel 2011. The weather over the past few days has been great and today was looking good. The easterly wind had a bit of a chill to it, but a perfect day for cycling. Pierre had planned a route around the Kent countryside to the south of Maidstone and this time, his fiancée Krissy was going to join in.

Plan was to meet at Maidstone East station, I would take the train and Pierre & Krissy would drive over. After sorting out which car park to meet in (there are two at Maidstone East and typically we went to different ones) it was unload the bikes and get ready to go..

First stage was to brave the traffic in Maidstone and find our way onto the main route. Bit of a climb to get out of Maidstone and the traffic was a bit busy. Still soon made it to the village of Linton and turned off onto quiet country roads and straight into a steep climb. Both Krissy and I ended up walking part of it while Pierre (as usual) cycled all the way up. The view from the top was fantastic – over the apple orchards and rolling countryside of Kent. 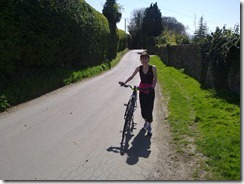 Krissy walking up a hill

By now the roads had levelled out and cycling was easy. The route took us past Hop fields, Oast Houses, farms, apple and pear orchards, lakes and ponds and hedgerows honeycombed with rabbit burrows. We also saw pheasants, rabbits and many other birds. The apple trees were in flower and the bluebells were just beginning to appear. The sun was shining – and a great day for cycling on country roads.

One thing that did surprise us was the lack of pubs in the villages. Eventually we made a small detour to Claygate and stopped for lunch and a pint at the White Hart pub. Then it was back on the road. 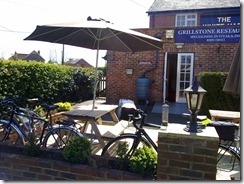 Lunch at the White Hart

A bit further on, Krissy began to feel slightly unwell which made cycling a bit more difficult for her so we re-planned the route to take a more direct path back to Maidstone. As ever, this involved climbing a steep hill. As we were most of the way around the route by this stage this only reduced the trip by a few Km. Back in Maidstone we tried to avoid the busy main roads and ended up on the cycle routes and walking through the pedestrianised area to take us back to Maidstone East station.

At the station, Pierre and Krissy headed off to their car and I went to catch a train which turned up about 10 mins later.

All in all an excellent ride through the Kent countryside on a sunny day. All good training for the long ride in September.