Last night, the rain returned and once again they had little sleep and the tents were wet. Pierre and Joe were both up around 8 am. They were all packed up by 8.50am and decided to skip breakfast and head for an earlier ferry to Le Verdon than planned as it was such a grey wet morning. They cut straight across Royan and got to the ferry port at 9.15, the ferry left at 9.30 and they were at Le Verdon at 10.15. 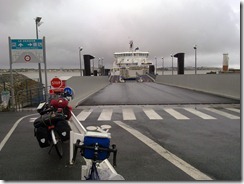 There was a lot in the local papers about the strong winds over the previous days and they met a couple of Dutch cyclists on the ferry who were on a trip from Holland to Santiago de Compostela. They had only managed 30 km a day over the last couple of days so Joe and Pierre felt better about their own progress. The cyclists passed each other several times during the day but then their routes differed.

Immediately after leaving the ferry Joe and Pierre stopped for a coffee, near the lighthouse. 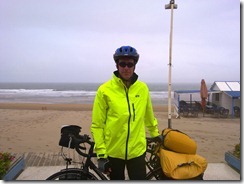 They then found a cycle path that would take them all the way to their next destination Hourtin Plage. They routed through Soulac Sur Mer for breakfast and then rejoined the cycle paths. The paths were straight, bounded by pine trees and very flat.

There were pine trees everywhere – next to you, in front of you, in the distance and everything tasted and smelt of pine trees. The main hazard on the path was pine cones. Pierre saw a red squirrel and Joe was looking at mushrooms growing in the forest – and pine trees. The scenery was so uniform that a give way sign appeared interesting, and a sighting of a car was rare. Once again they could hear, but not see, the ocean. 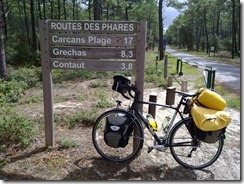 They entered Hourtin Plage, passed an enormous campsite, passed another side of it – and then realised that it was where they were heading. They had a choice of pitches and chose one near the entrance. It was very sandy. Their tents were sopping wet when they unloaded them and then when the tents were up, the rain came again, so now the tents were covered in wet sand as well.

After a restorative beer, Joe and Pierre changed and headed for the beach. It was a very sandy beach, with flags to mark where swimming was safe, as there were warnings about strong currents, and there were also lifeguards on duty. Joe went paddling and was very tempted to go swimming, but the undertow was very strong and he didn’t want to get his head wound wet. Joe is not known for paddling in the sea and often declares heated pools to be freezing, so the water must have been warm. The Atlantic – warm! Even Pierre was persuaded to get his feet wet and was soon enjoying the water too. 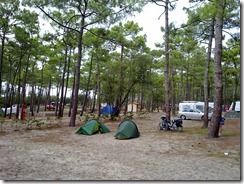 The campsite. Pierre is trying to hide behind a tree on the right hand side of the photo! 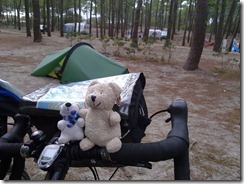 Two other members of the team, who were also on Big Wheel 1, enjoying a gap between showers.

They returned to the campsite and decided to eat in the campsite restaurant. Pierre had a charcuterie salad and moules frites, Joe had carpaccio of beef and a lamb cutlet, and they washed it down with a carafe of red wine and water.

The flat ground was not easy to cycle on as it meant cycling constantly but the wind was normal. The forecast for the next two days is headwinds again, but hopefully not as strong. It’s also forecast to be hot – 31 degrees C – for their cycle to Bordeaux.

It was raining again as Joe turned in for bed but quite warm – about 19 degrees C.