The previous night, it had been a beautiful clear night when Joe went to have a shower and ring me. Unfortunately, it then began to rain hard. Joe had left his tent unzipped to air it and when he returned he found that water had poured in and soaked the inside of the tent, his sleeping bag, mat etc. Joe swore a lot, Pierre snored a lot, and Joe mopped up with loo roll as best as he could. The tents are great and don’t leak – but they need to be zipped up if it rains! It continued to rain hard through the night.

They were camped close to the river and Joe was woken at 6 am by ducks quacking and squawking – confit de canard was very much on his mind!  This didn’t stop them so Joe finally got up at 8.30 and swore at them and they moved off!

Thankfully the campsite cafe was serving pain au chocolat, croissants and double coffees so after breakfasting, the sun was shining and they packed up their sopping tents and equipment and moved off at about 10.30.

Today there was a very strong headwind – it made the going very very hard. The descents and climbs were longer – about 5km, but because of the dreadful headwind, it seemed more diffficult than Normandy last year. The headwind was truly ferocious and made them grateful for even lorries overtaking as it gave them a brief respite. On the flat, in a low gear pushing hard against the wind, they barely managed 10 km/h – this rose to 20km/h if they were sheltered by a row of trees. A Tour de France peloton would have been useful!  Even going downhill they had to pedal in low gear to avoid being blown backwards ( Joe nearly was blown back in a tunnel passing below an autoroute as the wind was head on in the tunnel). Joe called it the Vampire wind – sucking the life out of you! It was very very hard going.

Like last year, today was a day of Eoliennes as they passed very close to a number of wind farms. They would spot them in the distance on the horizon, think “ hope we’re not going up there” and then 45 mins later pass close to them – and then there was a descent! This happened several times. The arms of the Eoliennes were pointing the way they were going and the headwind was ensuring that both Eoliennes and cyclists were working hard.

The slow speeds meant that they noticed the wildlife more – the lizards were very quick so all they saw of them were disappearing tails, but they saw praying mantises, black shiny beetles and grasshoppers sitting in the road and shorn sheep in the fields.

Today the roads were wet but they escaped the rain themselves.

Finding lunch was hard but they finally managed to get a ham and cheese sandwich at a boulangerie. It was late though – 3pm and they were running out of energy.

They passed into the Vendee at exactly the 200 km cumulative cycling mark.

Joe was really very tired and the backs of his legs have become very sore.

Unlike the previous day, the campsite was well signed and they found it without any difficulty – arriving just after 16.30. They swapped their waterproofs for suncream, as it was 26 degrees on arrival. They put their tents up and with the sun shining, were able to dry everything out. The campsite was €7.50 for both of them – a quarter of the cost of the first campsite. 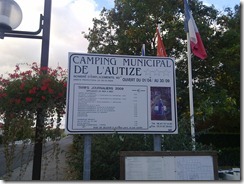 They headed for a nearby hotel Hotel au Chant des Grenouilles and had a couple of beers outside before heading inside for food. The proprietor allowed them to charge up their phones and served them fabulous faux fillet steak, frites and salad for 8 Euros each. They washed it down with a couple of carafes of wine and water, and two colonels ( sorbet topped with vodka). At 10pm the proprietor asked them if they wanted anything else and said that they sit and finish their drinks at their leisure, no hurry, and just to switch the lights off and close the door when they left. A very welcoming place and welcoming host. 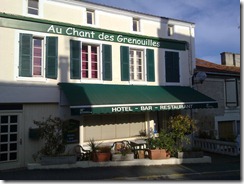 The only downside of the Au Chant des Grenouilles was that the mobile phone signal was very low so they had to return to the campsite to make their calls. It was a nice evening though with clear skies and the wind had dropped.

Vital statistics – approx 65 km – but it had been very difficult with the headwind.