All night, the wind and rain hammered on the tent. Joe re-pegged and re-tensioned Pierre’s tent twice during the night and Pierre repaid the favour by re-tensioning Joe’s at about 8 am when he got up. Joe got up shortly afterwards – neither he nor Pierre had much sleep during the night because of the noise of the wind and the rain. They had had to chain their bikes to the hedge rather than the nearest tree as the tree had been swaying and moving too much, and they could hear the movement of the trees within their tents.

A good breakfast was available at the campsite and after a couple of coffees and a pain an chocolat (Joe) and a croissant ( Pierre) , they prepared to take tents down and finish packing up – at which point the heavens opened again. Joe got water inside his tent as the rain ran down the sleeve of his waterproof jacket as he was taking the tent down. Typical! And the wind was blowing hard again…

They headed South East and the wind came strongly from the West as they moved towards Rochfort in their wet weather gear. However, things improved – the French Government have set up some great cycle tracks in the area which they headed for and the wind began to die down. The tracks were sheltered so Joe and Pierre began to get hot and took off their wet weather gear as it was now drizzling rather than raining hard. There was some road work to do, but mostly they were able to use the cycle tracks all the way to the transporter bridge at Rochfort. This transbordeur bridge is not really a bridge but a suspended raft that crosses the Charente river in 4 minutes and 20 seconds. It was built in 1900 and is in use in the summer. 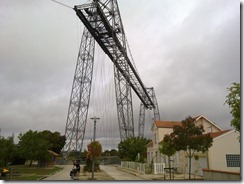 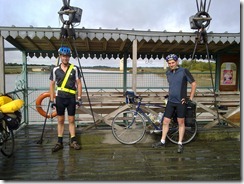 On arriving at the bridge, they asked when it was next operating and they were told “now” – there were a couple of pedestrians already on and so they obviously comprised a load! They slowly went across on the mechanical bridge and then were able to use cycle tracks almost to Soubise.

They carried on along the D3 – it was flat and there was a west wind but it wasn’t a problem, just annoying. They crossed lots of small rivers and streams, and there was still water (maybe salt?).

They stopped at a lovely fortified town – Brouage – for lunch, quite early. They had decided that was a priority after yesterday! After Moules Frites ( Pierre) and a large Ham Salad with eggs, tomatoes etc (Joe), they themselves were fortified and pressed on. Apart from a few km, most of the way was via cycle routes, and even a huge bridge had a cycle lane on it.

They passed through Ronce Les Bains and continued along the cycle routes, parallel to the sea. However, as the area was forested and there were sand dunes they couldn’t actually see the sea as they cycled along. Joe was rained on by acorns at one point – he had stopped to take a photo and was beneath an oak tree when a gust of wind or an animal dislodged a load of acorns. 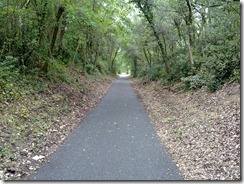 They arrived at La Coubre and diverted briefly to visit a lighthouse and to climb sand-dunes. They then turned again onto the cycle lanes towards St Palais Sur Mer – and another lighthouse. 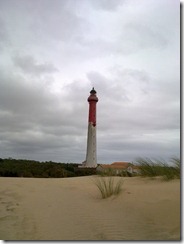 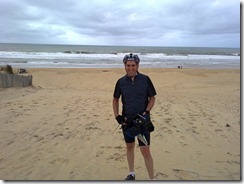 Pierre on the sand 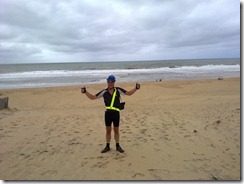 Joe happy to be beside the seaside!

At La Palmyre, there were 2 lane cycle ways (1 each way) plus a pedestrian path – amazing! It’s a pity that some of the pedestrians chose to walk in the centre of the cycle lanes, pushing buggies and complaining at being asked to move aside, but the provision of the routes was superb.

Then there was a sign up to say that the cycle route was ahead was difficult - short steep climbs, short steep descents. For our cyclists it was fabulous – like a roller coaster and a welcome change after the last couple of days. And there was no harsh wind, just normal wind levels. After the roaring of the wind, it seemed to be so quiet. It was such a pleasure to be riding in peace and even the sun was peeping out from time to time.

They carried on to Royan and the campsite, which they managed to overshoot – but only by about 1km. The smiling girl at reception offered them a choice of location and they put their tents up, leaving them open and empty to let them dry out. They then headed for the campsite bar which was open and they had a beer before sorting the rest of their stuff out.

They went out for fuel – to a Bar Brasserie called Le Calumet in Royan. From there they could see another lighthouse, bringing the total for the day to 3!

They had a two course meal and two carafes of wine and water. Pierre opted for soft boiled eggs with foie gras and Joe had a goat’s cheese pastry with honey to start. Then Pierre had Paella and Joe took revenge on the French duck population by choosing Confit de Canard. They were offered a small rum each on the house from a selection so Pierre had a caramel rum and Joe a ginger one.

The inside of the tents had almost dried out thankfully. (Sadly the rain returned in the night though).

Joe felt 100% better than the day before and even felt that had it been necessary he could have ridden another 20 km more. Not riding against a constant strong headwind made such a difference!