The day started off raining, and the tents and other things got sopping wet, but had to be stashed away. After breakfast with the nice couple that they'd met the day before, they said goodbye and headed off. 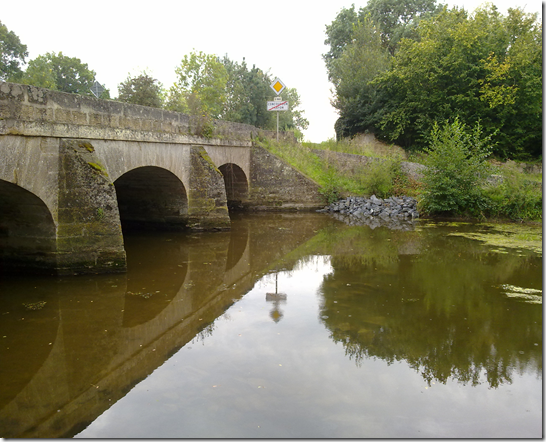 The roads were good for cycling - gentle climbs and gentle descents, enough to make it interesting but not too arduous. The countryside was lovely - lots and lots of flowers, attractive architecture and pretty villages. In short, typical Loire Valley scenery.

The rain cleared and the sun came out and they came through a lovely village, Passavant Sur Layon, with a stunning ruined chateau. A place to revisit.

They were thinking of putting on sun cream but there was a large black cloud on the horizon moving swiftly their way. As the entered the village of Cersay, there was a great clap of thunder that made even the car drivers stop, and the heavens opened. They took refuge against the wind, first in a hairdressers shop doorway and then in a bus shelter. If they had been in the open countryside they would have been seriously soaked and unable to ride due to the wind. So they waited for the storm to move north and the blue sky to appear before leaving their refuge and heading off again.

Two more black clouds passed them by, with only spits of rain. Then it got very hot and sunny. The terrain changed to agricultural land – more like that of Northern France, which they passed through during Big Wheel Part 1. There were lots of cows, especially Charolais and one herd were expert at synchronised head turning as our cyclists passed!

They’d had trouble finding somewhere to eat and it was late by the time they did manage to get a ham sandwich and a panache – 15.30pm.

There were now sharp ascents and descents, though only lasting 1 km, not 15km like Normandy last year. They weren’t too bad, but it started raining and they “hit the wall” at about 50km – probably because of the late fuelling. Both Pierre and Joe were very tired – there was a strong headwind as well to add to the rain and cloud.

They had the address of the campsite, but like other campsites and hotels in France, the directions on their website and their address were misleading. They couldn’t find the campsite, despite calling me and getting me to check to see whether I could find any better directions! They’d called the telephone number of the site, only to find that it was only answered until 17.30. They passed a camper van several times that also appeared to be lost – probably looking for the same place! They decided to have one last look and if not, were going to look for a hotel, but thankfully found it. They were greeted by a friendly woman and put up their wet tents rapidly, leaving them empty and open in the hope of drying them out a bit. Then they tacked a cold platter of crudites, saucisson, pork, beef, salad, bread and dessert for €12 , washed down of course by beer. They’d had to cycle an additional 15km when they thought they’d finished as they couldn’t find the campsite ( including hill climbs to cross the river) so their legs were sore . Pierre especially was very tired.